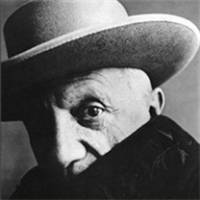 Pablo Ruiz Picasso was born in Málaga on October the 25th, 1881.

His father, a teacher at the Academy of Fine Arts in Barcelona, gave him his first artistic education. In 1903, Picasso settled in Paris: he immediately felt the distance that separates him from the "Fauves", then in vogue, from their flat figuration and their bright colors. Like Toulouse-Lautrec, he chose his subjects in the world of theater, circus, the poor people, rendering them with a precise line, and with a unique color: these are the "blue period" and, after 1905, the " pink period ".

With Braque, from 1906 to 1910, he sought a new way of dealing with subjects, at first simple such as still lifes. As in a laboratory, the canvas becomes a work surface on which objects are placed and recomposed from multiple angles. Thus is born cubism which is a "creation" of forms, and not only a way of rendering real.

From 1918, Picasso returned to a more traditional, more classic style (Flûte de Pan, 1923). Around 1925, Picasso changed course again: the influence of surrealism broke out in the irreverent "Crucifixion" (1930) and in a series of paintings where fantastic metamorphoses unfold ("figures au bord de mer", 1931). Upset by the Spanish war, he painted the tragic "Guernica" (1936). After World WarII, Picasso created the famous Dove for the poster of the peace movement (1949).

Picasso then aroused a crowd of imitators, and was known worldwide. This did not prevent him from pursuing an extraordinary and prolific production that André Malraux has defined as "the greatest enterprise of destruction and creation of forms of our time".

Considered the greatest genius of modern art, Picasso passed away in Mougins in 1973, over ninety years old.