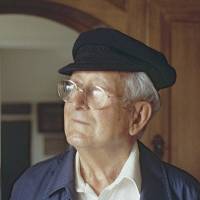 Jean Hélion, pseudonym of Jean Bichier, is a French painter and engraver, born on April 21, 1904 in Couterne, Normandy.

He studied pharmacy preparer in Lille, then chemistry, but became an architectural designer in Paris, where he was responsible for taking surveys of churches, sculptures, street corners, etc. He also follows architecture courses at the National School of Decorative Arts. In the 1920s, he launched into painting, with a geometric tendency, alongside Piet Mondrian, Fernand Léger and Theo van Doesburg. Quickly, he moved towards an abstraction which privileged volume, rhythm and movement.

From 1927, Hélion participated in the artistic review L'Acte and offered analyzes and syntheses to the main European journals. The following year, he exhibited at the Salon des Indépendants. Friendly, he joined the circle of "artists of Montparnasse". From 1929, his paintings became more and more abstract.

At the end of the 1930s, he began to outline the contours, in particular those of the heads in the manner of Jean Arp. First tempted by communism, as were a number of artists of the time, he made a trip to the Soviet Union, from where he returned disillusioned, then left to visit the United States. He discovers there the force and the violence of capitalism, but manages to settle in New York where he meets in particular Meyer Schapiro.

He then devoted himself to a figurative work inspired by scenes from everyday life, going even, in the 1950s, to the extreme, even to the grotesque. He painted still lifes in which he incorporated objects from ordinary life - in particular pumpkins, bowler hats and umbrellas - objects charged with symbols, which find a permanent place in his works. Later, he will compromise with a painting incorporating colored spots.

He is now considered to be the forerunner of the New German Fauves of the 1970s and figuratives of the 1980s. However, his works from the 1930s and 1950s are generally remembered above all.