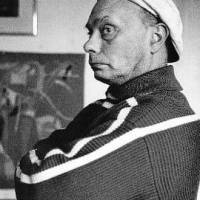 André Lanskoy was born in 1902 in Moscow. He studied in St. Petersburg and then in Kiev. In 1921 he arrived in Paris, passionate about painting, and joined the Grande-Chaumière, academy that saw Tamara De Lempicka as well as Alexander Calder or Alberto Giacometti.

André Lanskoy was very quickly noticed by German gallery owner and collector Wilhelm Uhde who made him make his first personal exhibition in 1925.

André Lanskoy is then a figurative painter, in the Slavic lineage, with fixed interiors, marked by a very "flat" perspective. It is from 1938 that his painting evolves towards abstraction. He begins the realization of a series of gouaches (probably his favorite technique) where, little by little, he revisits his conception of the cutting of space. Very geometric, made of large white lines that cut out his subjects, still figurative, he frees himself in the course of his work of representation, to decompose the forms, transforming the characters of yesteryear into an assembly of soft tasks.

A worthy animator of the New School of Paris, his work of the 50s and 60s is today the most sought after collector, especially gouaches where he has been able to mix different subjects. His work is not unlike that of De Staël, Poliakoff or even Soutine (with whom he had built a solid friendship in his early years in the French capital).

André Lanskoy died in Paris in 1976. He is buried in the Russian cemetery of Sainte-Geneviève-des-Bois.