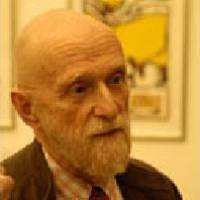 Pierre Alechinsky is a belgian painter born in 1927 in Brussels.

Attracted by painting, Pierre Alechinsky begins aged 17 in the Ecole Nationale Supérieure d'Architecture et des Arts Décoratifs de la Cambre in Brussels. He was involved in the Cobra artistic movement with Karel Appel and Asger Jorn and organised exhibitions. In the early fifties, he learnt the art of engraving with Stanley William Hayter and also Japanese calligraphy. He met Giacometti, Bram Van Velde, and Victor Brauner.

In 1955, he signs for his first exhibition at the Palais des Beaux-Arts de Bruxelles,
then at the Institute of Contemporary Arts of London. His artworks, prints, lithographies, engravings and books illustrations can also be found in the USA, in France, in the Netherlands, Denmark and Germany.

On and after 1965, fascinated by the Oriental calligraphy, he uses acrylic painting, ink, different types of paper as bills, and gets carried away by action painting technique.

During the eighties, he became for four years a teacher of plastic arts at the Ecole Nationale Supérieure des Beaux Arts.

He lives and works in France.