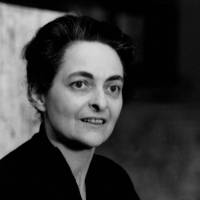 At the age of eleven, Vieira da Silva began learning drawing and painting at the Lisbon Academy of Fine Arts.

She studied painting with Fernand Léger, Charles Dufresne, Henry de Waroquier, sculpture with Antoine Bourdelle, and engraving with Stanley Hayter and Johnny Friedlaender, all masters in their discipline.

She moved to France in 1928, where she married the Hungarian-born painter Árpád Szenes in 1930. She was naturalised as a French citizen in 1956.

In 1930 she exhibited her paintings in Paris. After a brief stay in Lisbon and a period spent in Brazil during the Second World War, she lived and worked in France, mainly in Paris, for the rest of her life.