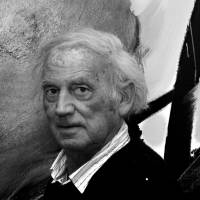 After studying mathematics, he decided to devote himself to painting.

He painted his first paintings from life and imaginative compositions in 1945, and in 1947, he began to frequent the workshops of Montparnasse; the workshops of Othon Friesz, Ossip Zadkine.

He exhibited for the first time at the Salon des Réalités Nouvelles in 1953, which he then participated every year.

From 1962, he tends towards a more descriptive graphics, accentuates the contrasts and widens the space.

In 1976, he adopted gouache, Kraft collage and newsprint, following the development and unwinding of a body of research.

The Jean Miotte foundation was opened in New York in 2002, with a permanent collection of his works.