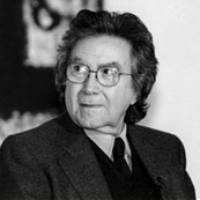 Antoni Tàpies was born in Barcelona on December 12, 1923.

A teenager of fragile health, he began to draw and paint very early. He studied law and commerce at the University of Law (1944-1946) in Barcelona and took drawing lessons at the Valls Academy. In those years, he will remain marked by the civil war and its atrocities.

In 1946, he made his first abstract works: collage from newspapers, strings, paper and aluminum. In 1948, he founded the magazine Dau Al Set with Ponç, Tharrats and Cuixart. He meets Joan Miro whose influence makes him enter a surrealist period. The same year, he participated in the Autumn Salon of Barcelona.

In 1950, his first personal exhibition took place at the Galleries Laietanes in Barcelona, while he obtained a scholarship for France. The following year, in Paris, he meets Braque, Picasso, discovers informal art with Dubuffet and Fautrier, as well as the writings of Michel Tapié. In 1952, he participated in the Venice Biennale and the following year his works are presented at the Martha Jackson Gallery in New York.

From 1954, he returned to his research of matter, mixing oil, pulverized marble, pigments in powder or latex, altered by informal signs, scraped in the pictorial layer. His painting as his sculpture, acquire an international reputation and his works are exhibited in all major museums in 1955, the year he exhibited in Paris, the Stadler Gallery. In 1973, a retrospective is organized at the Museum of Modern Art of the City of Paris and in 1988 a traveling retrospective in the United States. In 1981 he made his first ceramics with the German ceramist Hans Spinner.

In 1984, the Antoni Tàpies Foundation was created in Barcelona. In 1992, he took part in the Seville World Fair, at the Catalan Pavilion.