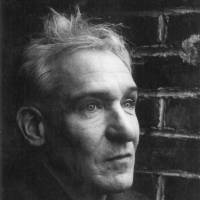 Born in 1910, Raoul Ubac is an artist from the New Ecole in Paris.

Raoul Ubac spent his early childhood in Germany (Prussia) between Cologne and Frankfurt.He returned to Paris in 1930 and enrolled in the Sorbonne.Then he met André Breton and frequented the surrealists and artists of Montparnasse.He undertook numerous trips across Europe and photographed the island of Hvar (now Croatia) of found stone assemblies.

Then, on the advice of Otto Freundlich, German painter and sculptor, he enrolled in the School of Applied Arts where he worked in drawing and photography.First of all, he is most interested in photography and is experimenting with processes of burning, solarization and petrification. He participated in the activities of the surrealists and exhibited under the pseudonym of Raoul Michelet at the Exposition Internationale du Surreéalisme in 1935, the first surrealist exhibition taking place in Belgium.

From 1936 he learned engraving in the studio of artist Stanley William Hayter and began to make photomontages. In 1970 he founded the magazine «L'invention collective» with René Magritte and then collaborated in the magazine «Messages» where he met Raymond Queneau and Paul Eluard.
After the war, he gradually moved away from surrealism and abandoned photography.

Raoul Ubac then embarks on drawing with a pen to create to launch himself in drawing with a feather and then engraving on slate to make gouaches, and ends up approaching the painting with an egg. He paints on panels covered with amalgamated resins which constitute a synthesis of his work and his research, dealing with the themes of bodies and furrows, subjects of predilection until his death.

In 1968 a retrospective of his work was presented in Brussels and at the Musée d'art moderne in Paris. Raoul Ubac received the Grand Prix national des arts in 1973. He was responsible for several sets of stained glass windows as well as reliefs, high reliefs, wall decorations and models of tapestries for public and private buildings. He has also illustrated with his drawings, engravings and lithographs some thirty books and is the author of the cover of the journal «Argile» published by Maeght from 1973 to 1981.

Ubac’s works are part of many collections of museums in France and Europe. In 1980, the French Post Office issued a stamp reproducing one of its creations.