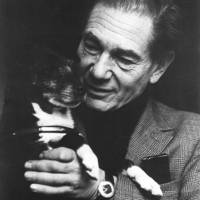 American born in New York in 1909, Henri Goetz will be naturalized French in 1949.

He is 26 when he marries the Dutch painter Christine Boumeester with whom he will share his life. He began his art studies at Harvard, pursuing them at the Central School of New York.

As a pupil, he will learn again, this time in Paris, at the Jullian Academies, at La Grande Chaumiere, and in the studio of Amedee Ozenfant.

His life and friendships are rich, he will be the friend of Arp, Picasso, Picabia, Hartung, Kandinsky and so many other artists he loves. He began engraving in 1940, which he enriched, become master of this art, new processes such as carborundum (1970).

Henri Goetz will illustrate famous works. A large number of solo exhibitions have dedicated his work, especially in Paris. His painting bears traces of fantasy and fantasy. In her day, she was sensitive to the contributions of surrealism. He will also found, with Raoul Ubac, the magazine "La main à plume" (1940-1941).

She will head resolutely into the lands of abstraction where the gestures of the given signs find a relationship with Soulages or Hartung. Henri Goetz will teach at the Académie Ranson, at the Grande Chaumière, just back things, at the former Academy André Lhote, before becoming, in 1969, professor of painting and engraving at the University of Vincennes.