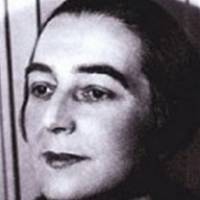 Sonia Delaunay was born in Gradshik, Ukraine in 1885. Sara Ilinitchna Stern, known as Sonia Stern, was adopted in 1890 by her uncle HenriTerk, a lawyer from St. Petersburg and a cultured collector of paintings that woke young Sonia to art.

She attended the Atelier Schmidt-Reuter in Karlsruhe from 1903 to 1904, then the Academy ofthe Palette in Paris where she moved in 1905. She then painted portraits and fauve nudes. Her first solo exhibition was organized in 1908.

After a first marriage, she married the painter Robert Delaunayin 1910 which she considered a poet speaking with colors. She followed her husband on the paths of abstraction.

Sonia Delaunay, from 1913 to 1935, devoted herself essentially, in the same mode, to the applied arts (cushions, cardigans, dresses, lampshades, etc.). She also produced bindings, covers and book illustrations. She opened a decoration shop ("Casa Sonia"), then created, with couturier Jacques Heim, the "Simultaneous Shop" for the International Exhibition of Decorative Arts (Paris, 1925).

The artist became a specialist in clothing design and the influence of paintingon it.

In the 1930s, the couple joined the group Abstraction-Creation, which defends non-figurative art. From 1935 to 1937, she returned to painting and made wall panels.

The Delaunay actively participated in the great collective adventure of "Art in the street", encouraged by the Popular Front.

Robert Delaunay passed away in 1941, and Sonia retired to Grasse until the end of the war.

In 1946, she co-founded the Salon des Réalités Nouvelles and exhibited with the group Concrete Art. Sonia Delaunay was also the source of the Espace group. Still faithful topure color, exalted by the law of simultaneous contrasts, she realized series, designed mosaics, stained glass, carpets and tapestries, made sets and costumes for the theater, illustrated books. If the careers of Robert and Sonia Delaunay are indissociable, their respective work were marked by their personalities.

Sonia Delaunay passed away in Paris in 1979.